A while ago, I switched back to Windows so I could play video games… While I enjoyed playing video games, one thing I missed was the integration of so many languages and the operating system. So now, I’m back on Xubuntu.

This time, I put in a little more effort for finding apps I’ll be using and creating a nice look and feel. I’m documenting it, both to share, and in case I screw something up really bad.

Most of it is just memory… The first Linux Distro I used touted Xfce+Nautilus as a key reason to use it, and I’ve just stuck with Xfce+Nautilus.

I wish I could say it was for speed or better customization abilities or panel management, but it’s just the default for me. I use Gnome Apps and some intensive theme engines, so performance isn’t much better.

The Look and Feel 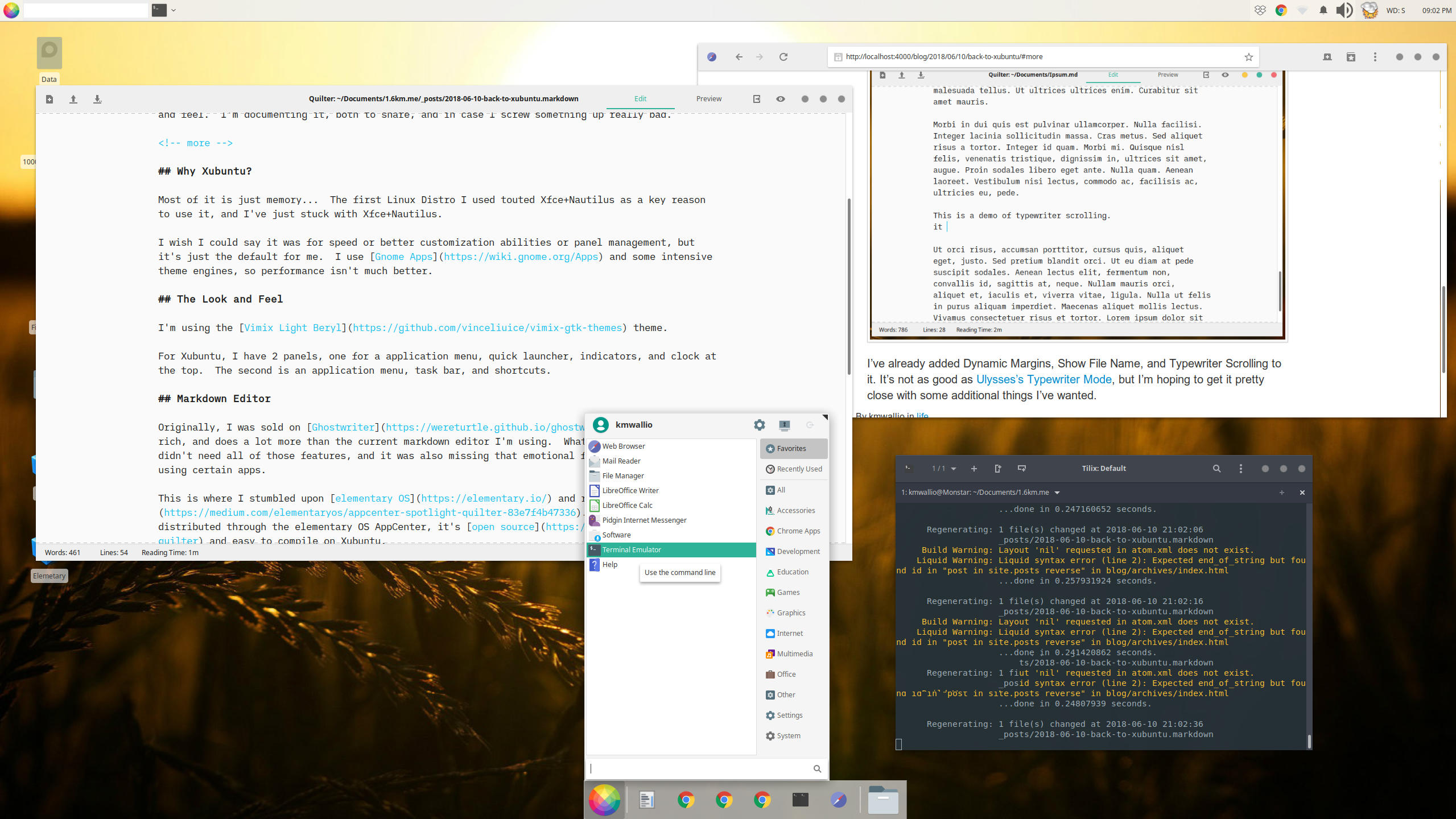 The icons are the beautiful Paper Project.

The wallpaper is Sunset by Layperson. It used to be available on Deviant Art, but the account no longer looks active.

Originally, I was sold on Ghostwriter. It’s feature rich, and does a lot more than the current markdown editor I’m using. What I identified was I didn’t need all of those features, and it was also missing that emotional feeling you get when using certain apps.

This is where I stumbled upon elementary OS and read about Quilter. There’s a lot of articles about designing for emotion, and I feel like elementary OS and Quilter encompass that very well. Although it’s only distributed through the elementary OS AppCenter, it’s open source and easy to compile on Xubuntu.

I’ve had a lot of fun hacking away at Quilter. It’s written in Vala, which was easier to approach and I expected.

I’ve already added Dynamic Margins, Show File Name, and Typewriter Scrolling to it. It’s not as good as Ulysses’s Typewriter Mode, but I’m hoping to get it pretty close with some additional things I’ve wanted.

I’ve started using Tilix. I’m really all about the eyecandy at the moment, and Tilix provides both great eye candy and functionality.

I’m using Gitg. I haven’t found anything like Git Tower yet, but Gitg is pretty decent.

I haven’t found a good photo and video editor yet. For the most part, I’ll be using my macBook and iPad for photography and syncing with dropbox.

I’m really enjoying turning my computer into a welcoming environment. I’m also enjoying the social coding aspect of it. Finding projects and contributing back (selfishly) the features I want help me enjoy using my computer more.

Ever since working on a computer has become my 9-5, I’ve found my personal computer has to become more welcoming and more “homey” for me to sit down and write or program.

I’m really happy I’ve been able to contribute to a great project while building a great personal project environment.